What is World Class Sales? Part 1

Is it really possible to build a truly World Class Sales Team?

In this 4 part series we will answer that question and define what it takes to build a World Class Sales Team!

The fish rises from the head up or it rots from the head down, so let’s start at the top.  World Class Leaders in all industries and business have a few things in common.   They don’t accept excuses, and they have high expectations.  Just look at a few top NFL Head Coaches if you want examples.  Jimmy Johnson, Bill Parcels,  Don Shula, Mike Ditka and Bill Belachick. All known are hard nosed but fair with high expectations.

The weatherman assured him that there was no chance of rain in the coming
days. So the king went fishing with his wife, the queen.  On the way he met a farmer on his donkey.

Upon seeing the king the farmer said, “Your Majesty, you should return to the palace!  In just a short time I expect a huge amount of rain to fall in this area”.

The king was polite and considerate, he replied: “I hold the palace meteorologist in high regard.  He is an extensively educated and experienced professional.  And besides, I pay him very high wages. He gave me a very different forecast. I trust him.”

So the king continued on his way.  However, a short time later a torrential rain fell from the sky.  The King and Queen were totally soaked and their entourage chuckled upon seeing them in such a shameful condition.

Furious, the king returned to the palace and gave the order to fire the palace meteorologist.  Then he summoned the farmer and offered him the prestigious and high paying role of royal forecaster.

The farmer said; “Your Majesty, I do not know anything about forecasting.  I obtain my information from my donkey.  If I see my donkey’s ears drooping, it means with certainty that it will rain.”

So the king hired the donkey. And thus, began the practice of hiring dumb asses to work in the government and occupy its highest and most influential positions.

The chart below defines the Competencies, Tendencies and Effectiveness based on 3rd party data measured by Objective Management Group and their 30+ years of collecting data on 11K+ companies with over 1M sales and sales managers. 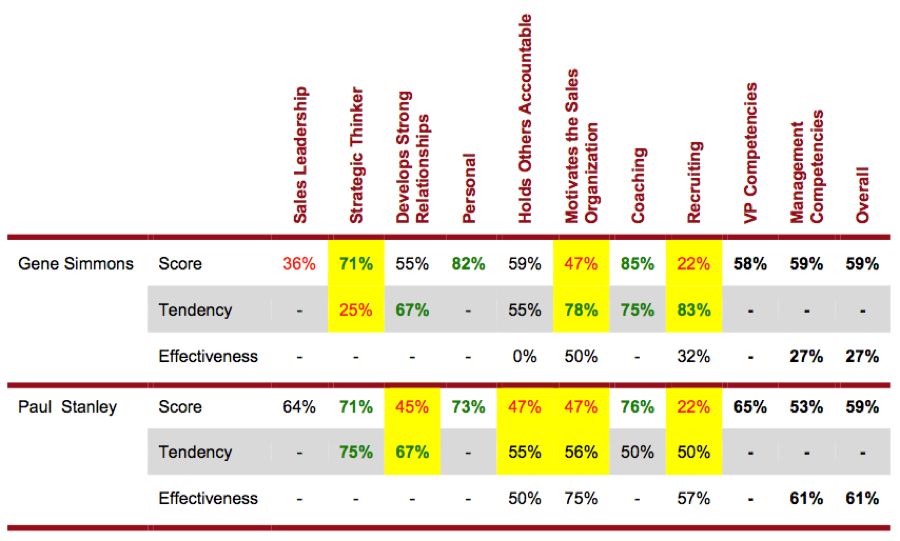 The names have been changed to Rock Stars to protect the guilty. Although, these leaders are hardly Rock Stars and they certainly are not World Class.  However, they scarily similar to thousands of companies I have completed our Sales Analysis with. And no insult meant, but my strong guess is they are similar you your sales leaders. It’s not their fault, I’m sure they are good people.  They just don’t know what they don’t know.  The question is; if they could be better would it help grow the business faster and start down the path to World Class?

What can we learn?  It’s easy to see that Paul is much stronger in sales Leadership than Gene and I won’t bore you what you can see your self.  It’s interesting the highlighted columns shows a strength in skills and a weakness in tendency or visa versa.  So let me take a quick minute and define tendency.  The Tendency is the go to mode when they are under crisis or at a cross-roads.  If the skill is strong and the Tendency is weak that tells us the Sales Leader is not preying on their strengths.  When the Skill is weak and the tendency is strong that tells us they are not effective.  Don’t confuse that with the Effectiveness row in the chart. The effectiveness finding comes from the answers give by the Sales Managers findings.

What else do you see in the chart?